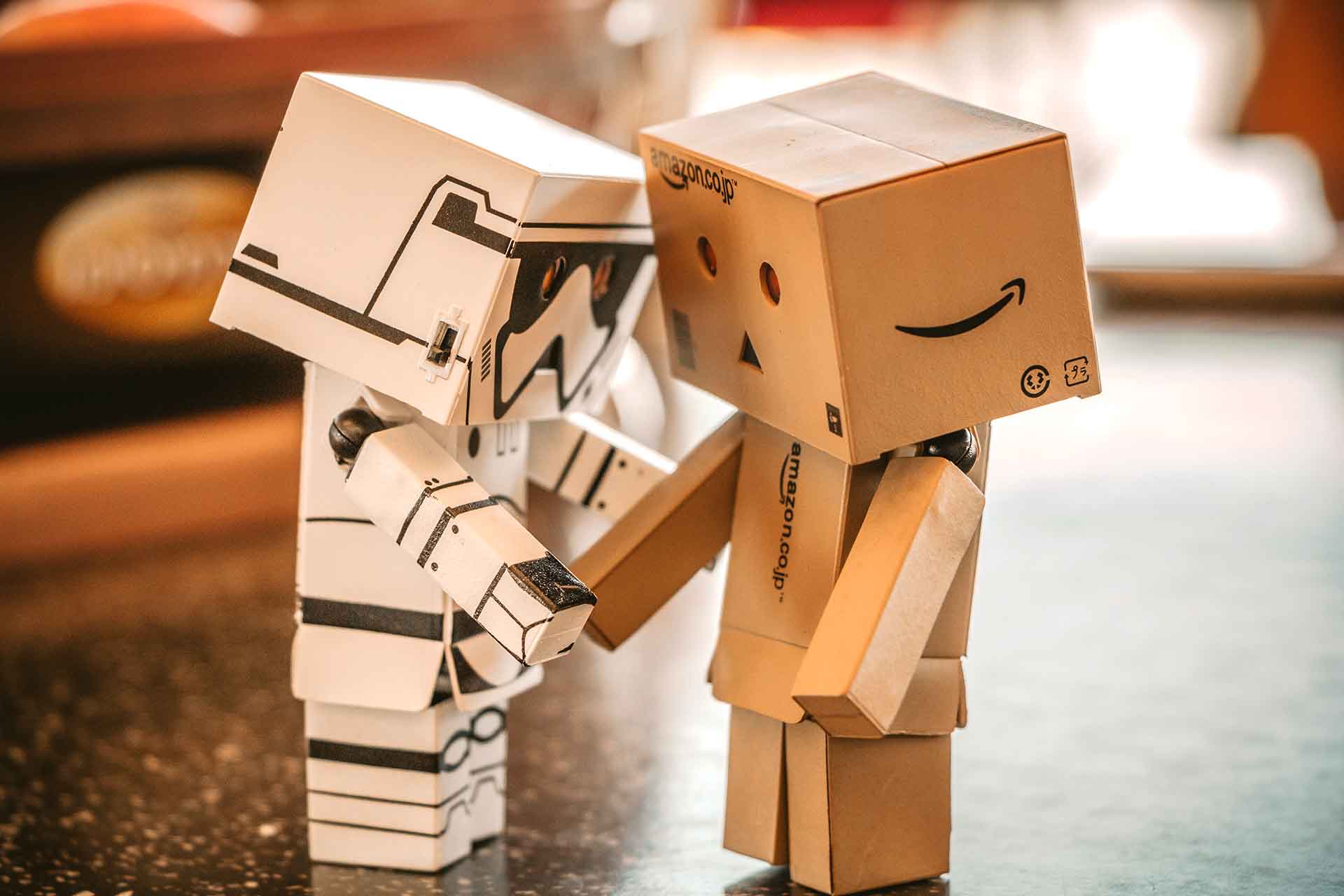 Put simply. Our demands are too high.

From working with businesses across a wide range of sectors over the years I’ve seen consumer demands and expectations soar to extreme levels.

We expect professional services to be complete in days, deliveries in hours, email responses in minutes and live chat messages in seconds. But can we really sustain this?

So let’s break it down to what that really entails…

It’s a common expectation to get almost anything delivered next day, but in reality, that’s just not achievable, sustainable or efficient. Even Amazon, who many would argue has been the leader in next-day deliveries with its ‘Prime’ delivery services, is struggling to meet demands.

The Amazon Prime service which is advertised as ‘Unlimited One-Day Delivery’ has been found to not live up to its claims on multiple occasions with Citizen’s Advice and the Advertising Standards Authority (ASA) filing formal complaints due to 1 in 4 deliveries arriving late.

Premium delivery services, such as Amazon Prime, account for more than half of all parcel deliveries. In 2016, it was predicted that Amazon sold 636 items per second on its ‘Prime Day’ event. In 2018 it wouldn’t be unreasonable to assume that figure increased nearer to the 800 items per second with a large majority of those orders placed with ‘Prime’ delivery; since ‘Prime Day’ is exclusively for Amazon Prime subscribers. That level of demand puts incredible strain on the infrastructure of Amazon’s warehouses and also, most importantly, their delivery services.

As consumers, we very rarely ever consider this massive feat of logistics on an incredible scale and instead we see the ‘Buy Now’ button, the confirmation email, then expect the parcel to be within our hands in 24 hours at the latest. In reality, we’re fooling ourselves, this level of service with that much demand is never going to be 100% achievable; unless we use bots.

Of course, Amazon has an answer to these increasing expectations and is a core leader in utilising automated bots across its departments from its 100,000 warehouse bots, AI fuelled chatbots and currently in-testing delivery bots and drones. These advances in automation are critical to Amazon’s continued growth and success as it continuously strives to outperform any other possible competitor on price, speed and convenience. This is great for us consumers but the strain that this will put on normal people during the transition will be significant and potentially crippling.

From the businesses I work with I’ve seen the demand for professional services rise dramatically but also the speed in which consumers expect them to be delivered.

Accountancy services and recruitment services are particular sectors which I have witnessed the highest of demands from consumers. Their clients will establish their needs, for example, a TAX calculation from an accountant, and will then expect that to be completed either within the day or within a few days. The issue is that professional, services such as accountants, have to manage a large portfolio of clients in order to operate. If an accountancy firm had the capacity to take on a single clients job and perform that job almost instantly then they would either be extremely expensive or not have enough work to keep them in business. Therefore it can only be expected that consumers jobs go into a workflow alongside every other job, then within a set amount of time each job is completed in order; within 7-14 days for example.

To meet demand in the near future, accountancy software will be highly automated and in sync with government systems in order to perform TAX returns on a monthly basis rather than yearly so self-employed people will operate much like an employee. The government previously attempted to put in place a quarterly TAX return system but this has since been rolled back as the technology and industry is not yet ready.

It may be many years yet until accountancy, TAX processing and other professional services are completely automated so for the time being it’s still always handy to have a reliable human who you can understand your more complex needs. At the same time, we need to understand that humans are people with lives, workflows and processes so let’s give each other the time to help each other and deliver quality, well thought-out services.

Email has mutated into a 24-7 communication beast with no end in sight of it slowing down. In 2018 it was recorded that 281 billion emails on average are sent and received every single day by Statista. It’s now commonplace to be expected to answer emails at all times between 6 AM – 11 PM with some employees even catching up on unread emails during the early hours of the morning.

It’s easy for companies and teams to drown in emails. From working with multiple small to medium companies, emails received to the customer support inbox can be at a rate of 5 – 10 per minute at peak times. As an email usually contains much more detail than a message each one takes a significant amount of consideration and reply time which requires a huge customer support team working around the clock. Even with a large team, it’s not always possible for many companies to reply to each and every email within an hour or a few hours, depending on the nature of the email it can sometimes take days.

To combat this huge email demand, companies are putting in place automation techniques that work both independently and alongside humans. For instance, if you email Amazon support, their AI will automatically attempt to respond with a relevant reply based on the information within your email. If that response doesn’t suffice you can then reply to get a human response. Also, as a helping hand to employees answering these emails manually, many business-based email platforms, including Gmail, support canned responses which allow the user to select a pre-typed response to common questions that they can either send instantly or alter segments appropriately before sending.

Although email usage will continue to grow, business to consumer email communication will decrease over the next 5 years and will be replaced by live chat and messaging services such as Tawk.to and WhatsApp as explained below.

Business to consumer live chat has grown significantly over the past few years with 79% of customers preferring live chat over other communication channels. Customers love the speed, simplicity and familiarity of live chat but most businesses are struggling to meet the demands of live chat according to Kayako.

The speed at which messages come in and the expectancy of a reply within a few seconds is extremely difficult for companies to account for. Support agents are usually managing multiple live chats or even sometimes multiple communication channels such as phone calls and live chat. It’s extremely rare to have one support agent dedicated to a single customers chat simply because it is far too expensive to provide this level of service. Due to this 47% of customers haven’t had a positive experience with live chat in the last month according to Kayako.

Luckily, businesses have the gift of AI and automation which they can utilise to help them respond faster, better and around the clock. Live chat suits AI automation far better than Email and Phone as each message is usually a simple snippet of information either in the form of a question or confirmation of information. Due to this, it is easy to program a bot to identify characteristics of short messages, understand what the customer requires and reply with the relevant response; all within a split second.

Businesses can take advantage of such tools as ItsAlive.io to build Facebook Messenger Bots, Landbot.io to build on-site help bots and even build in-house simple bots for Twitter DMs by following Twitter’s documentation. Each one of these methods allows you to pre-program the bot with automated responses based on user activity or messages they sent. If configured correctly, this can cut down the need for human response significantly allowing the support agents to focus on the more complex requests.

Due to the speed, simplicity and opportunity to be improved by bots, Live Chat will soon become the leading channel for customers to communicate with businesses of all kinds. It will soon become expected, and almost mandatory, for businesses to have a live chat option available on their website.

As we progress further into the future of tech, Live Chat will then move from websites to existing messaging apps such as WhatsApp and Facebook Messenger. With Mark Zuckerberg’s announcement to merge the Facebook Messenger, WhatsApp and Instagram Messages infrastructure this will be made even easier for businesses.

Update: FedEx announces that it’s ending it’s Express Service contract with Amazon which will be another blow to Amazon’s logistics at the cost of customer satisfaction and speed of delivery. Read more about the story on Engadget.